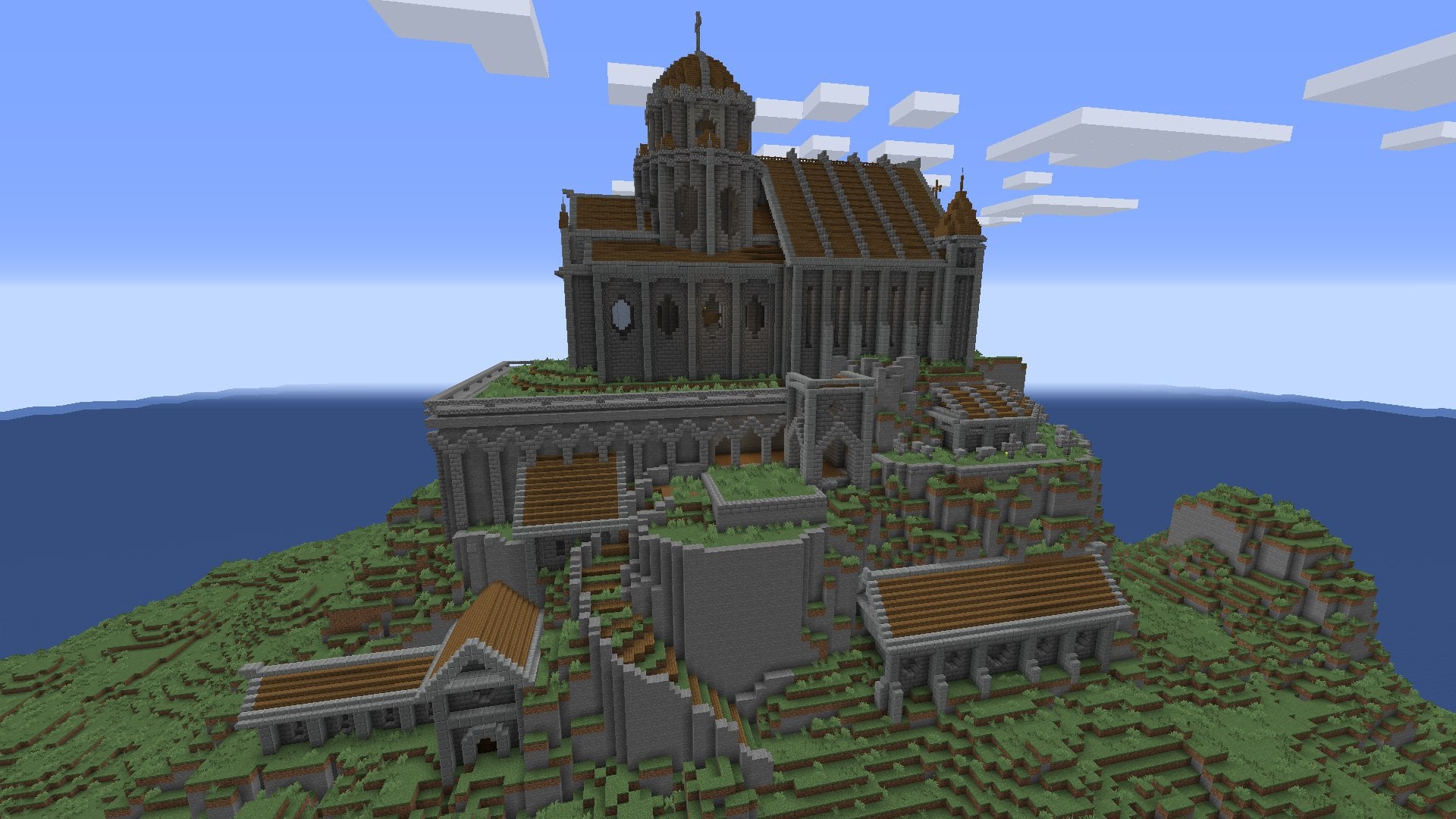 This build contains some of my favorite building techniques in Minecraft. When I’m critiquing certain builds I might tell them that they lack enough variety in their blocks, but this build uses… basically all the same block. It could probably benefit from it, but it doesn’t need to. The advantages of building as large as this build does, is that depth becomes an incredibly simple matter, and Fluffiddy creates images of depth everywhere. The first image in the album is all you need to see that, from the rolling hills at it’s base to the gaping windows and arching rooftops at the… top. It has just enough detail as it needs. It isn’t showy, or preachy, it doesn’t tell you that the trick to building is a mixture of cobblestone, coarse dirt, and oak planks, it’s just good. Really good.

This build is a perfect complement to Fluffiddy’s build, since it goes a completely different route and captures the same effect. Fluffiddy’s build works without block variety because of scale, but Comrade_Rick packs the same amount of interesting building into a much tighter space. This is mainly accomplished by block variety on the outside, but as you get inside you can see that his interiors hold up very well, with combinations of newer blocks. My personal favorites come out wherever he uses stripped birch logs, whether as exterior walls or the covered walking paths along the inside garden. What makes it work best, in my opinion, is that it feels like two builds that have glitched into occupying the same space without making it feel awkward. The contrasting color palettes make each other pop out, but don’t seem out of place. A great build.

We had a hard time putting this in third place, and out of all three of these builds I’m gonna steal the absolute most out of this one for my builds. This fantastic build is a testament to the colors green and gray in Minecraft, taking full advantage of the wide variety of different models and shades that have been added over the years. The primary strength of this build is it’s pure asymmetricality in every single direction. The place is falling apart, and this technique solidifies that. The underside of the build is alive with beautifully placed greenery and villagers, while the upperside has fallen into disrepair, mostly consistenting of the wonderfully built towers and stone pathways. The precarious overhangs are an excellent way to bring depth to a build, not feeling too unrealistic for how far out they reach, and the stone slabs make a surprisingly tall build feel… more closely packed together, without making it all fill into a blur of gray. And who doesn’t like an aqueduct?

We’re going to the seas!

This week we’ll be stepping into the past (or into the present since they are still present today) and building tall ships! So let’s put up the sails and get ready to set sail on our oceans!

Build a tall ship in the ocean or on the dock. It must have an interior (not fully decorated, but at least 1 room).

If you don’t know what a tall ship is, consult [this image](https://seahistory.org/wp-content/uploads/Vessels.jpg)

**Sunday morning, July 4th 2021** A new challenge and winners are announced in that post